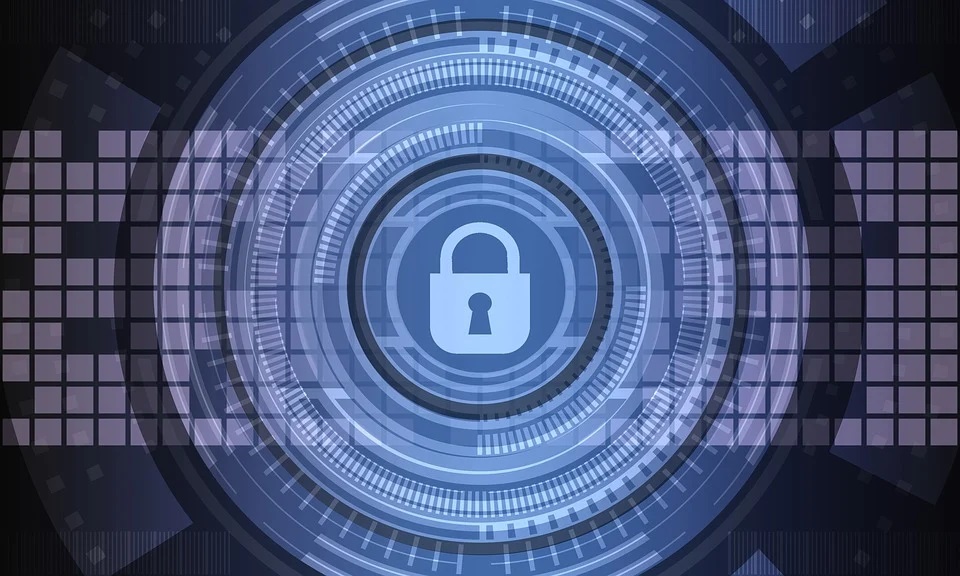 We tested the top-rated encryption software available on Windows 10 and compared how they fare against each other. These are the results of our extensive testing: 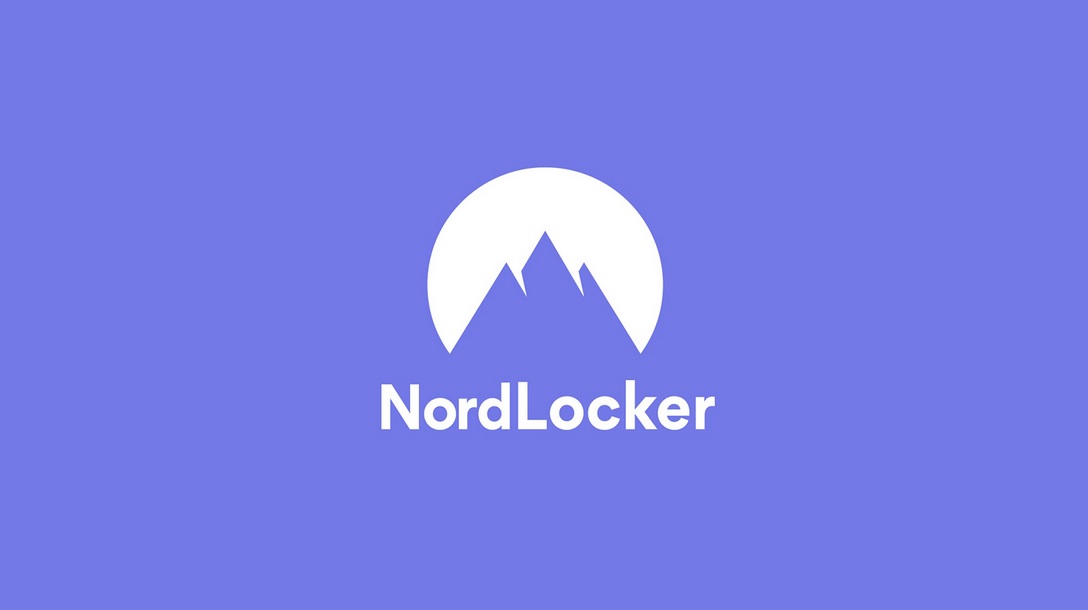 NordLocker has a simple yet highly effective approach to encryption. Users of the popular VPN service NordVPN are familiar with the high-quality products from the company. The app is not available for smartphones, instead only available as a desktop application. It comes with many security features for both free and paid users. Users can easily drag files into the encrypted locker or the secure cloud storage. Free users have access to 3 GB of cloud storage, but you can pay a monthly subscription ($3.99) for 500 GB of storage on NordLocker’s encrypted cloud server. Sharing files through the encrypted server is secured by end-to-end encryption and is straightforward and seamless. We highly recommend this relatively new, affordable, but highly secure service, especially for its zero-knowledge encryption system, giving users full privacy.). 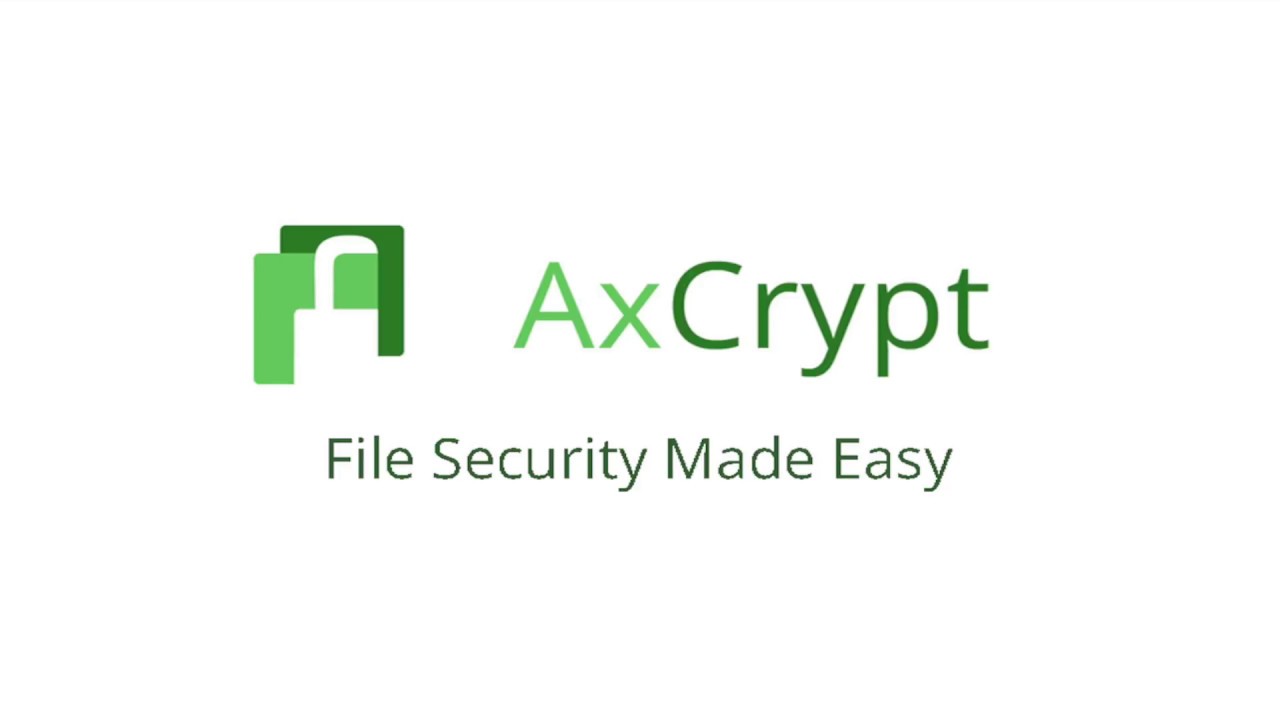 AxxCrypt comes feature-packed with a high level of security and many configurable options. Users access the application using a password. The software assesses your password as you type it, and even 16 characters are sometimes deemed insufficient. Users can edit encrypted files without decrypting them, and the platform offers a secure file-sharing service using public-key cryptography. Deleted files are automatically shredded, and there is a feature that suggests strong but memorable passwords for you. You store all your passwords on a secure online server as well. The only issue we could find is that you need to keep your computer in a safe and secure location. Overall the application is easy to use, despite the complex encryption package that it offers. A free version is available, and premium or business accounts can unlock more features for a monthly subscription ($3.75 or $9.92, respectively, as of June 2021). 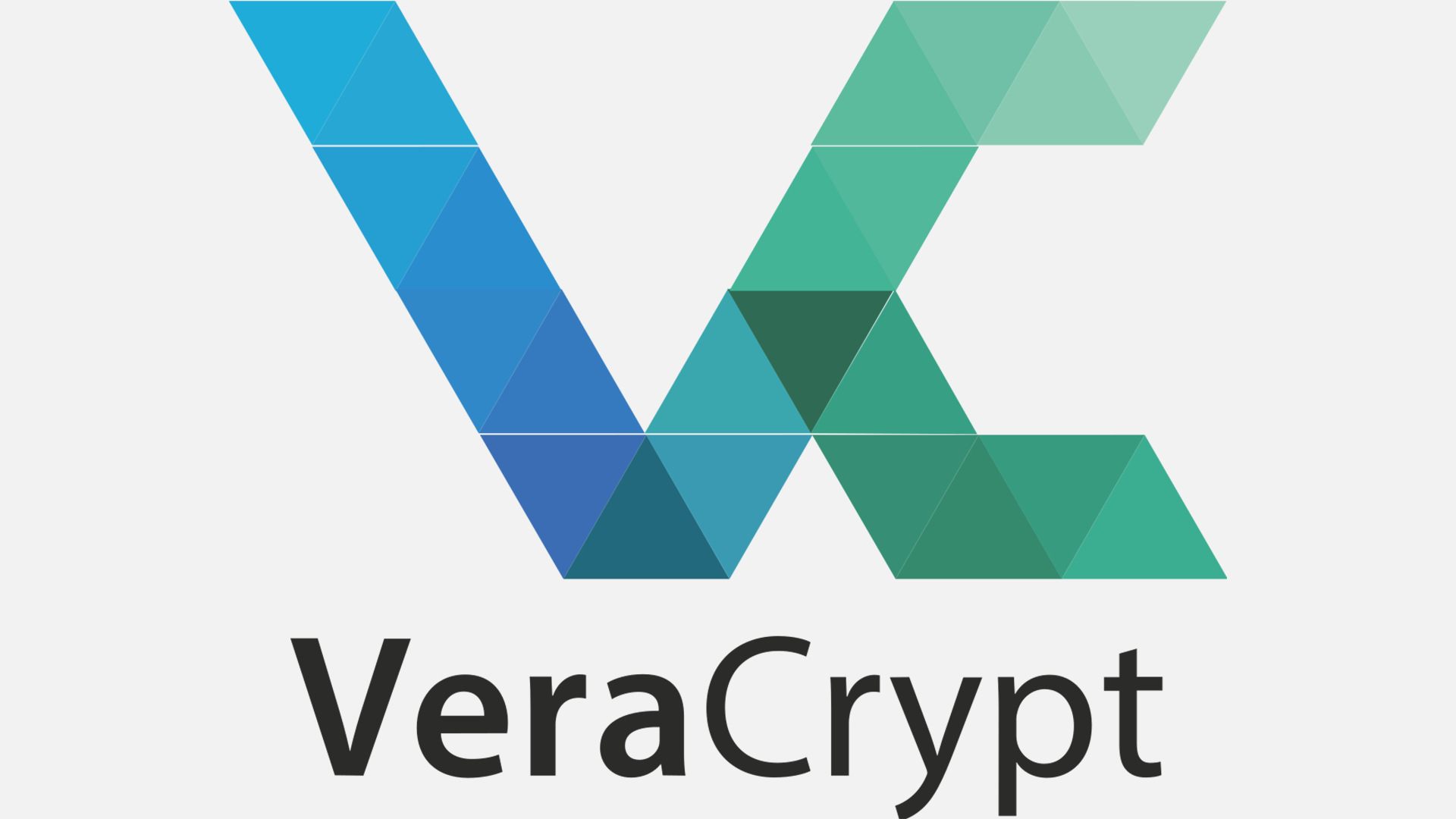 This privacy tool is user-friendly, open-source, and highly reliable. You can get the software entirely for free and expect top-notch encryption functionalities. There is no risk using this software because it is transparent about its privacy, and you can share access to an encrypted vault between multiple devices. Overall, this is a powerful, free option to add a layer of security for personal devices like your home computer. 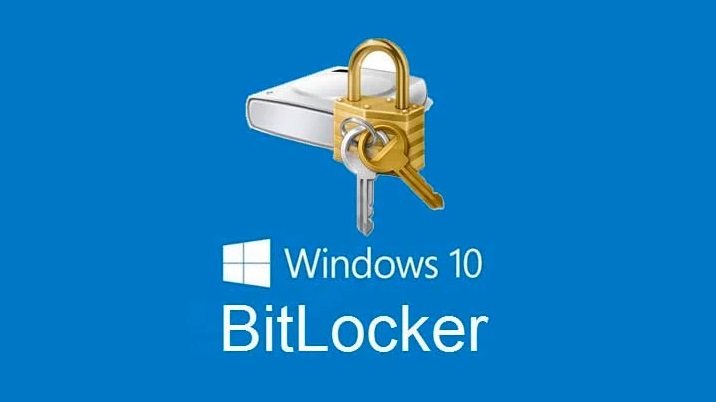 This is an advanced system developed by Microsoft that is capable of encrypting entire disk volumes. The setup of BitLocker is geared towards experts but offers a high level of security for desktops. Some Windows users (typically users of the Pro or Enterprise editions) can access this service free of charge. It is highly secure, although some users are not happy with the fact that it is a closed-source software (therefore, there is no clear guarantee that there aren’t any vulnerabilities). The fact that it is closed-source means that the government can coerce Microsoft into giving up your information. However, if you’re not doing anything particularly illegal (so for most of us, I would hope), this isn’t too big of an issue.

For a relatively low one-time cost of $34.95 (price updated in June 2021), users can install Steganos Safe on up to five devices and gain access to an exceptional encryption service. It runs on standards used by the US government (AES) and uses a long encryption key (256 bit). Thus, it would really be tough for anyone to crack their cipher. Still, the application also uses a Public Key Infrastructure (asymmetric encryption) to make sure everything is as secure as possible. There is also a file shredding service and many options for file storage. Overall, we found that it is relatively simple to learn how to use Steganos Safe, and it is worth getting for the increased security. 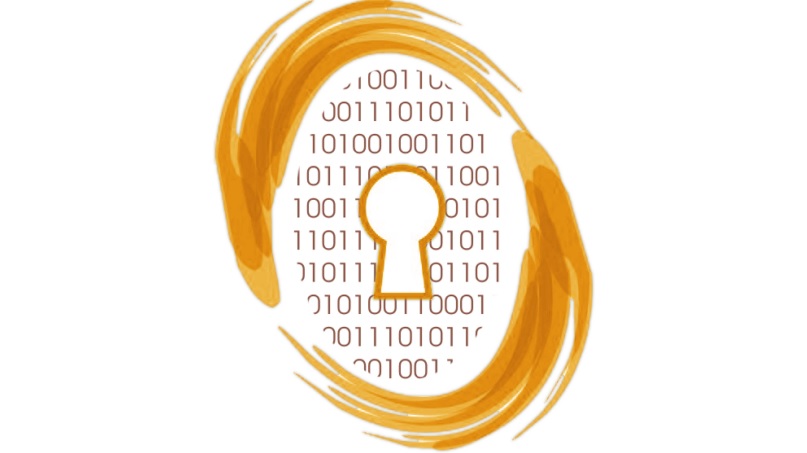 Despite the low price, this feature-rich software delivers on security. The encryption process is relatively fast and gives strong results. Although we would have liked to give separate passwords for files, we think the strong (256-bit) encryption is more than sufficient for most people’s security needs. In addition, it blends into Window’s operating system, making it familiar to use and simple enough.  It also includes a files shredder for an extra layer of protection. The price for a one-time purchase is around $30, with a free one-month trial available. 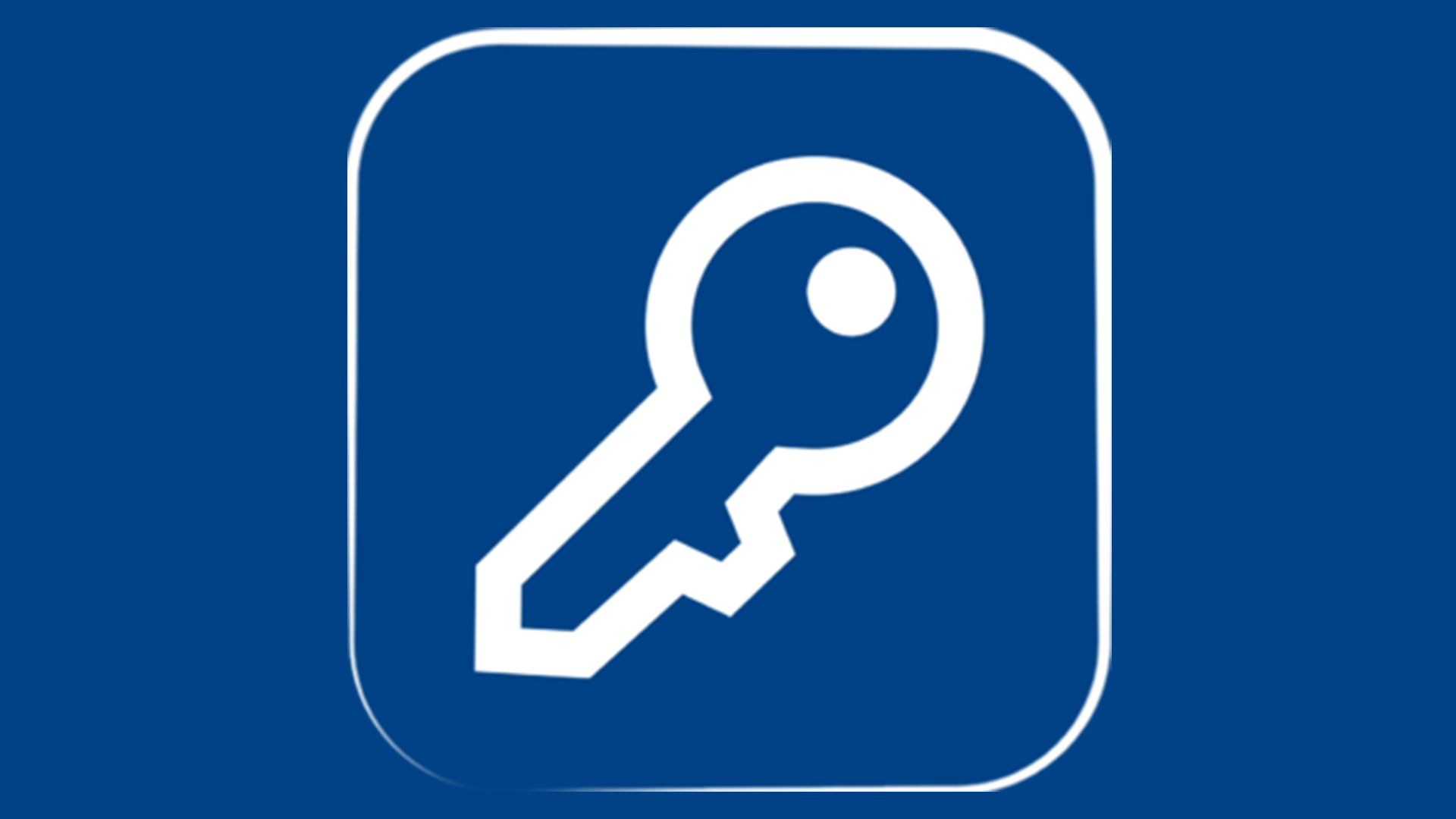 This excellent encryption software mainly targets smartphone users, but it works just as well on the desktop version. Files can be locked for protection, but you can use an encrypted vault for more sensitive data. The basic version is free to download, and there are many additional features. To unlock all the security extras, users can pay a one-time fee of around $40 or less. The application offers to shred files and free space to make sure deleted files can never be recovered. You can also use their secure online backup system if you are low on storage on your device. Encrypted lockers are made invisible for an extra layer of protection against hackers. There are many additional features such as a virtual wallet, history cleaner, and much more. We recommend getting this software to keep your data at a moderate to a high level of security. 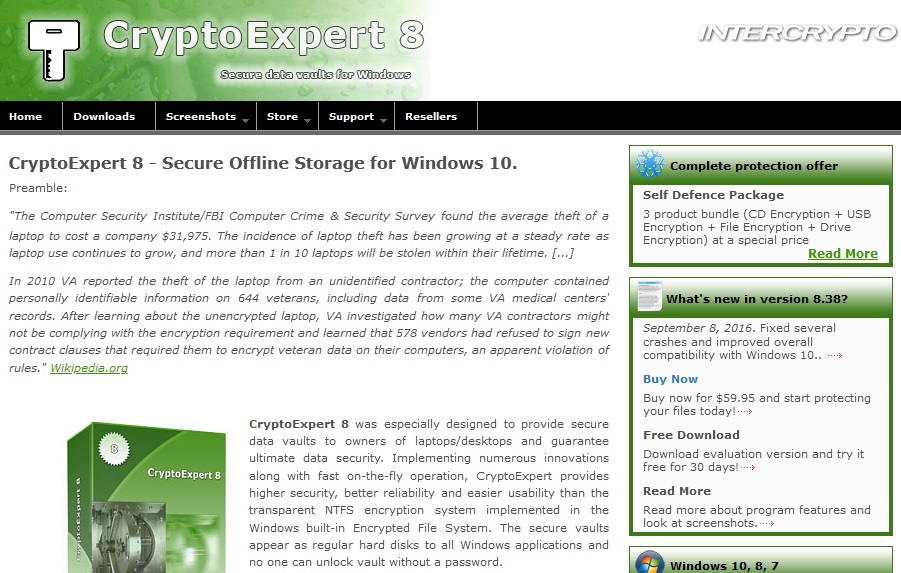 With two-factor authentication and high-level encryption, CryptoExpert is a great way to store your sensitive files. We would have preferred a file shredder (which is not available), but it provides ample security for most purposes. The program is designed to look like Windows Explorer for ease of use, and it is easy to create secure vaults to store your files. Although there is no subscription fee, the one-time price is higher than others at $59.95. 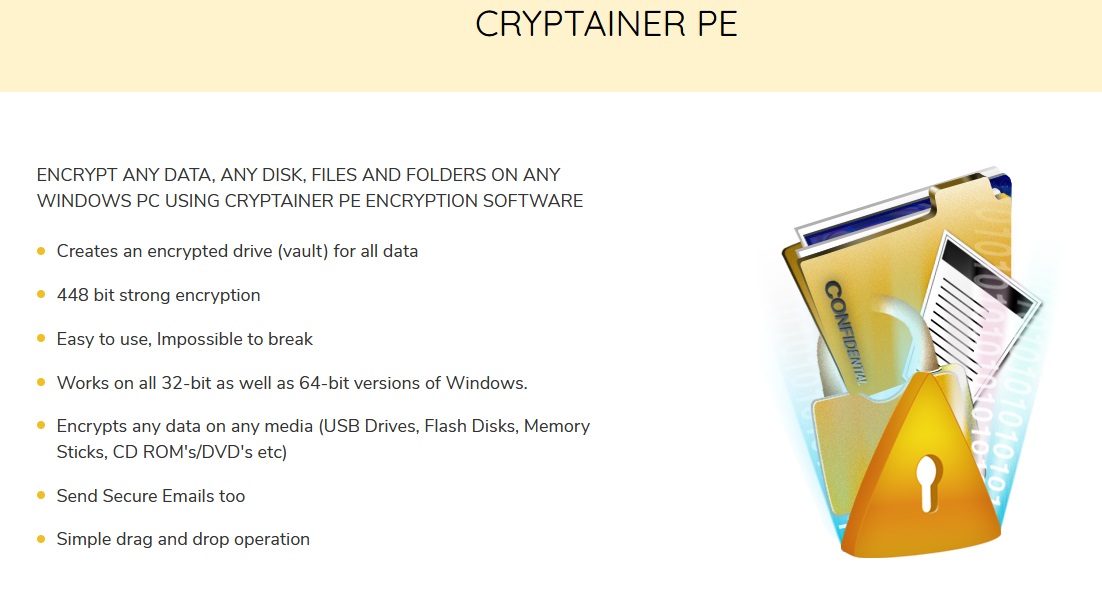 We think this is an expensive option to secure your files, but the $45 is well worth it to create 32 GB vaults for many. Ignoring the price, Cypherix Cryptainer PE is one of the best file encryption services available, with high standards of security and multiple extra in-built security features such as a password quality meter and email encryption. If you don’t mind limited tech support, there is a free edition (Cypherix Cryptainer LE). Still, if you’re a very privacy-aware user, we recommend the paid edition for better overall service. 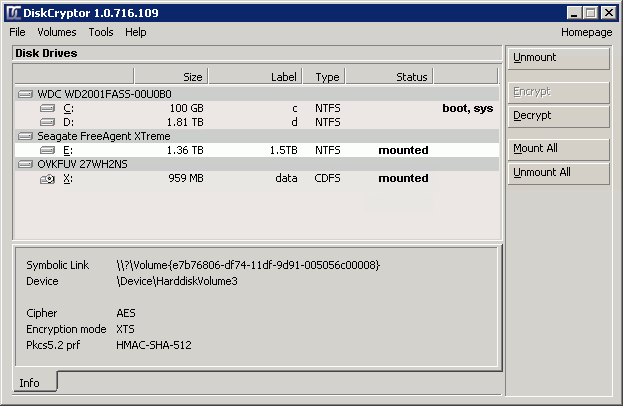 Diskcryptor is an effective, lightweight software to encrypt your entire drive. The open-source encryption is free and provides an extra layer of security for your entire device. Keep in mind that it will not hide the location of encrypted files. DiskCryptor also allows the encryption of system partitions with pre-boot authentication and supports hardware AES acceleration and dynamic disks. 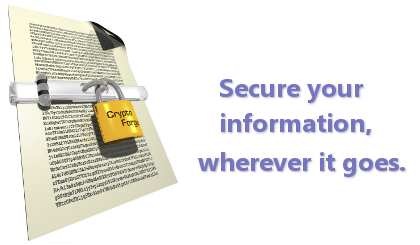 Last but not least, we tested CryptoForge to find a substantially strong encryption system. There is a secure deletion system (shredding files automatically), and it also manages text-only encryption fairly well. For $39.70 (June 2021 price), users are offered a lifetime license to have a high level of security. This is a great option for keeping your data secure. Keep in mind that it does store your passphrase as a backup which is a convenient feature but can be a security risk if you are not careful with it. CryptoForge also has a password strength rating feature to help you increase your security. Compared to competitors, it may lack features but makes up for it by layering encryption algorithms (it can layer up to four).

This is one of the best disc encryption software available for Mac OS, which offers a highly secure encryption system for the entire disk drive, that is relatively easy to use. In addition, there are many great security features, and it’s free for all Mac users. For example, FileVault 2 users are protected with XTS-AES-128 encryption and a 256-bit key, making it almost impossible for hackers to access your files.

What is encryption software?

It is a software or application that uses complex mathematical algorithms to encode data to make it more difficult for unauthorized users to access it. This means changing normal, human-readable data into something that requires a lot of deciphering for it to be legible again. These two processes are known as encryption and decryption, which are the key components of cryptography. In other words, the plaintext is converted into ciphertext to hide information or data. Then, when accessing the data, a key (which is only given to authorized users) is used to decode the ciphertext into plaintext again.

How does cryptography work?

As we have already mentioned, cryptography involves the encryption and decryption of data using a key. A key is a series of numbers (or characters) used to turn normal data into encrypted data and vice versa. Only people who have the so-called “decryption-key” can successfully decipher the data, so encrypted data stays encrypted unless a user is authorized to access it by obtaining a key.

This is the older method of encryption that is no longer used nowadays. In symmetric encryption, both ciphering and deciphering data depend on a single key. Although that makes this method easier and less expensive, it is also riskier and more susceptible to hacking. All it takes is a single breach in security for that one key to be stolen – and hence the encryption proves futile. To further illustrate, it is as if data is locked in a vault that can be opened using a key. If someone were to gain access to the key (by stealing it or copying it), the data stored in the vault could easily end up in their hands. This apparent security risk is why this system is no longer used by any encryption software.

The modern method of encryption, also known as end-to-end encryption, is safer and more secure than symmetric encryption. In this case, there are two sets of cryptographic keys used. The first one is a public key (shared) used to encrypt or cipher the data, turning the plaintext into ciphertext. After the data is shared, only authorized users are given the second set of keys (private) that can be used to decipher the encrypted data. This means there are two separate levels of protection involved in this cryptography method. In the vault and key illustration we used before, it would be as if the key used to open the vault will not work unless someone from inside the vault allows it. This is inherently safer, but it takes more processing power, time, and effort. Additionally, there is a bigger risk of one of the parties losing or forgetting the decryption key – thus rendering it almost impossible to recover the data.

Data encrypted using asymmetric encryption is harder to decipher, making it much more difficult for hackers to gain unauthorized access. Key size is also a major factor in the difficulty of deciphering encrypted data. A longer key (which consists of more bytes) is more complex and thus more secure. The best modern encryption software available use 128-bit keys to cipher data.

Why Would You Need an Encryption Software?

Many people make the mistake of assuming that they don’t need encryption software. The truth is unless your data is encrypted, it is at risk of getting hacked by people with malicious intent. Even if you don’t necessarily have a lot of confidential information, there is still a huge amount of everyday data collected and used in various ways. For example, your credit card information, banking details, and documents containing your name and address can easily be used for identity theft.

Even if you’re using a VPN, which only secures data while being transferred, using dedicated encryption software is an essential part of protecting your data and ensuring your privacy. This will ensure that while the data is stored on your device, and even after it arrives in a recipient device (if you ever send it), the data is kept safe and secure.