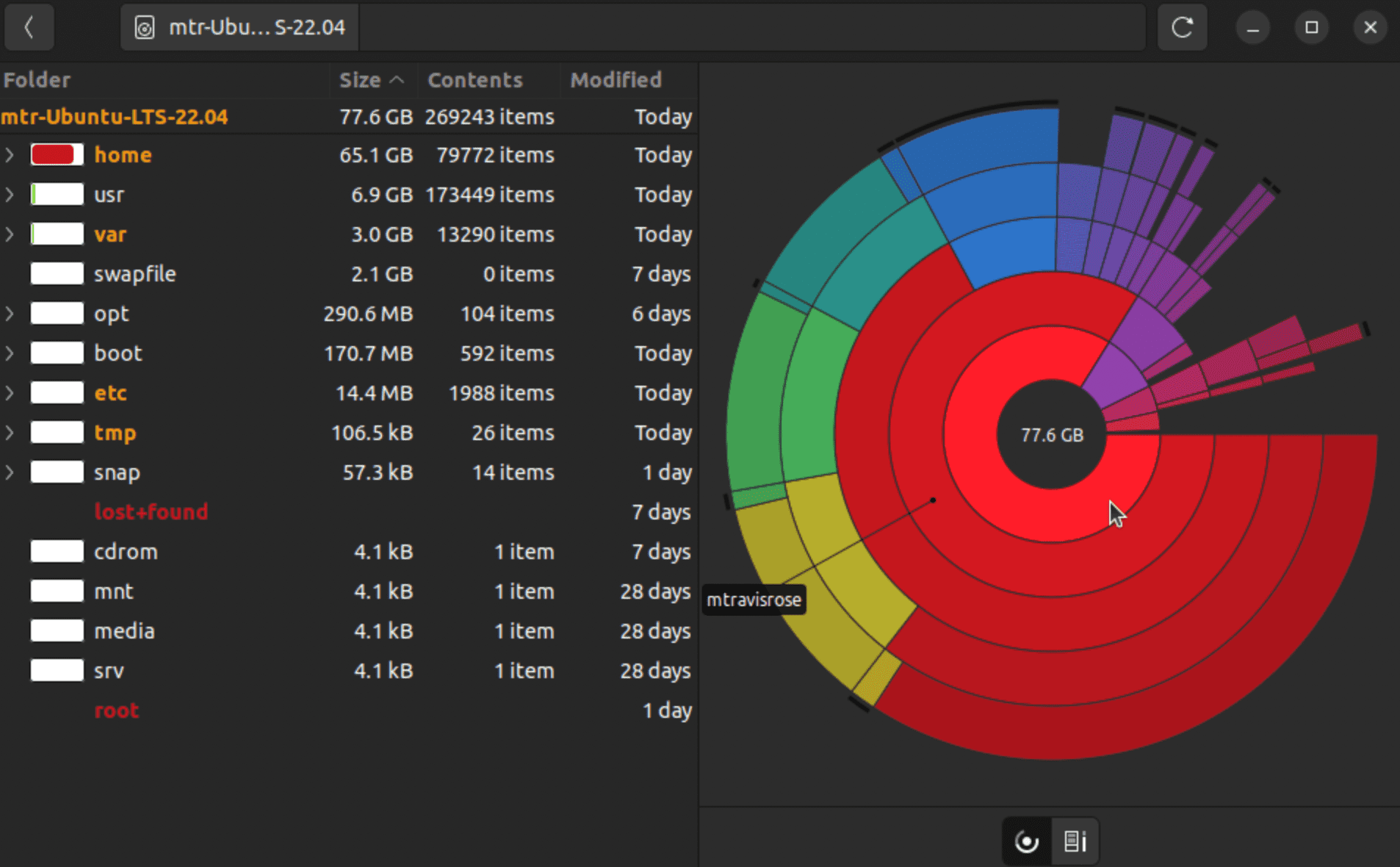 As a Linux user or administrator, knowing how much space you have left on your drive is vital to ensuring the health of your system. Fortunately, Linux provides plenty of tools, both command line and GUI-based, to find the space you have accessible on your drive and disk utilization.

Note: For this guide, we’re using three separate systems for this article:

Except for the installation commands apt, yum, and pacman, all other Linux commands used in this article are distro-independent, meaning they will work on any Linux distro.

Check Disk Space from the GUI

The default GUI Tool to check disk utilization on Linux distros using GNOME as their desktop environment is Disks (gnome-disk).

The default GUI tool to check disk utilization on Linux distros using KDE as their desktop environment is the Info Center tool.

The Disk Usage Analyzer tool, originally named Baobab, is one of the best GUI tools to check disk space utilization. The tool is so popular that it is automatically included in most Linux distros using the GNOME desktop environment.

To launch the Disk Usage Analyzer:

How to install the Disk Usage Analyzer Analyzer Tool

If the Disk Usage Analyzer tool is not included on your Linux distro, installing the tool from the command line is straightforward.

Note that you need superuser (root) privileges to run these commands.

To install Disk Usage Analyzer on Debian- and Ubuntu-based distros, type the following command from the command line:

To install Disk Usage Analyzer on RHEL- and CentOS-based distros, type the following command from the command line:

To install Disk Usage Analyzer on Arch-based distros, type the following command from the command line (note that we first update the system’s repositories with the pacman -Syu command):

Other Tools to Check Disk Space

There are other Linux tools users can install to check disk space usage:

A simple Google search will find the homepages of these tools and detailed instructions on how to install them for your particular Linux distro.

Note that all commands featured below must be run with superuser (root) privileges.

The du (disk usage) command provides Linux users with the estimated file usage of the system disk. Of all of the command-line tools for reporting disk space usage, the du command is the quickest and provides the most relevant data for most Linux users.

Linux users can check disk usage information of files and directories on a machine with the du command. The syntax of the du command is:

The syntax of the more command is:

df displays the Linux filesystem disk space usage. The syntax of the df command is:

To list blocks (including disks and partitions) on the system:

Warning: using the fdisk command with any options other than those specified below (-l) can damage your hard drive.

To display the partitions on your Linux filesystem, use the fdisk command and the -l option and target the Linux system disk, using the name revealed, nvme0n1, using the lsblk -l command in the previous section.

To display the partitions on your Linux filesystem using the disk name (nvme0n1) from the output of the lsblk -l command in the previous section:

Commands Used In This Article